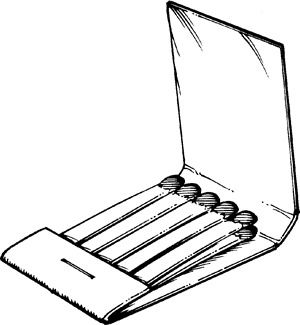 This week I was fortunate enough to be part of a new business venture that launched. It was been many months in the making, there were many brain storming sessions with industry experts- PhDs, literally- conversations on the math and science part of the components we are making, and many hours of collaboration and coordination by several of us partners, each 40 or more years old.

When you get to a tenured age within any industry, you'll find you've developed some inherent limitations on what you think can be done and what can’t be done. This is mainly a result of what you've been exposed to.

As an example, if someone asked you to design a book of matches, it would be difficult for you to think about matches in a different way than what you know them, as either the paper book-style, small box or the really cool, larger, camp-fire style box.

You have grown up thinking about matches in one of the few forms they are available. (Note: As a kid we did have those very, very cool long-stemmed matches for lighting the fireplace, however, as a “Blue Collar Family”, we didn’t use them often because they cost more to buy. They were for special occasions only!)

Anyway, May 11, 2015 rolls around and there we are, in an awesome space at the PORTAL buildingon the UNCC campus. Six of us present, Dr. Denis via Google Hangouts.

Now, enter the smart young guns, each a masters level educationally in their respective engineering disciplines, for day one orientation. As the youngsters sat and absorbed a very thorough set of detailed instructions on what we needed to do and by when to satisfy our investors, that Ryan, our CEO, presented, this concept hit me like a ton of lead:

We, Atom Power are revolutionizing the way electrical power is distributed, measured and controlled. It is truly a “brand new way” of power distribution. As I watched and listened, I suddenly realized the only folks in the meeting that thought of this as a huge undertaking were those of us with prior industry experience, either mechanical or electrical. The young engineers simply looked at the quandary as a challenge of math and science versus a timeline.

There was a guy who ran GE named Jack Welch, that regularly used the term, “Boundarylessness”. I have always liked that tongue twister, and that, to me, is what I was able to witness earlier this week.

If you can live in a state of unencumbered-ness, look at things with educated naiveté, and pull the blinders off, you can be the start of greatness.

The nice part about getting old though is that you get to have an internal filter (history) that can help analyze what really makes sense versus “Pie in the Sky”.  I am not talking about shooting down your own ideas before they reach the light of day, I mean simply applying some wisdom and balance to the thought process.

Don’t be held back by the match books of old, go out and create some awesomeness in your own world.