The Uniqueness Of A Group 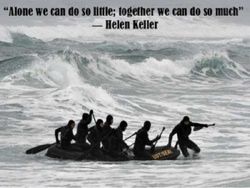 Last Tuesday, I found myself in a meeting surrounded by some very smart & very successful folks.  Don’t even say it... Yes, I was “the odd man out"!

As I sat and soaked in the many business discussions, I kept having this weird little thought in the back of my head.  What brought this group together?  It's a very disparate group, trades people like me, straight up accountants, operators of many different businesses, etc. You get it, a wide variety of people.

Twenty years ago, I was part of a very special team.  We had about a dozen members, most of us in our thirties. Some were a few years older and several a few years younger, but that was about the average age.  We absolutely killed the market we were in.  We sold, managed, engineered and propelled a very good group within an awesome company to greatness.

It was a very valuable experience and it compelled me to search out a book on group achievement, it was called “Why Great Teams Work”, or some similar title.  Back then I actually went into a physical book store at Lennox Square Mall in Atlanta and bought it.  That was P.A. for sure - Pre-AMAZON.  It was also the beginning of my book collection, but somehow I lost it in the move to Charlotte. I’ll add it to the list of things to re-buy.

Anyway, the down side to most groups is that they only last for a season in life.  No matter how they form, whether it's by a calculated and well-designed “guesstimate” that the team aligned will perform, or as in my case in Atlanta many years ago, by happen-stance, they just tend to fade away.  That is how our story ramped down.  The group is still successful to be sure, but the magic our team had “back in the day” will be hard to duplicate.

OK, back to the Atlanta meeting last week. The meeting was in full swing, it was around 2:30 PM and I needed a biological break. Upon reentering the room, I stood in the corner, just watching and listening to the conversations, ideas, what has worked before, what we are doing now, planning for, etc.

Then, KABOOM! Like a Ford Pinto getting rear-ended, it blew up in my head.  All of the folks in the group had a long-term marriage or long-team relationship.  100% of the ten people involved.  To me, that is too big of a percentage to be attributed to coincidence.

Later in the afternoon, once we broke up to handle individual stuff, you can read that as “catch-up on e-mail”, I thought about the successful people I know that are single or not in a long-term relationship. There are plenty of them, some are very successful, but the thought from earlier would not stop bouncing around in my head.

OK, now it was 1:38 AM and I was still pondering. I'm usually asleep by 10:00 PM, this obviously was my obsession de jour.  I jumped out of bed, fired up the Surface tablet, yes, I love it, and started looking up famous, wealthy, and successful (not in a Kayne kind of way, but in an enterprise building, more salt-of–the-Earth kind of way) type of people.

Bill Gates, Warren Buffett, Sir Richard Branson... Guess what, the three I just named are in, and have been for many, many years, long-term, stable relationships at home.  Locally, Howard “Smokey” Bissell, Fred Klein, and many more... This leads me to keep digging, I find more and more. Male, female, whatever, there is something to this.

Now my mission is to go out into this world and try to understand this secret sauce.  I started along this path a couple of years ago by interviewing several successful people. Some of them have been published, and others will be in the future. I call this series, “The Success Interviews”.  As I flip back though them, guess what! Yes, long-term relationships.  Looking at my list of 3 people I am soon to interview, right again.

My next rounds will focus more on this question to the interviewee, “What specifically about your personal relationships has impacted your success in life?"

Really, We Only Get One Chance

Years of work. Continually trying to exceed the expectations. Staying current so you can help...

These days, the data center is the central nervous system of an enterprise, housing all of the...

Understanding the Difference Between Predictive and Preventive HVAC Maintenance

When servicing your commercial facility, your HVAC partner will generally encounter and implement...